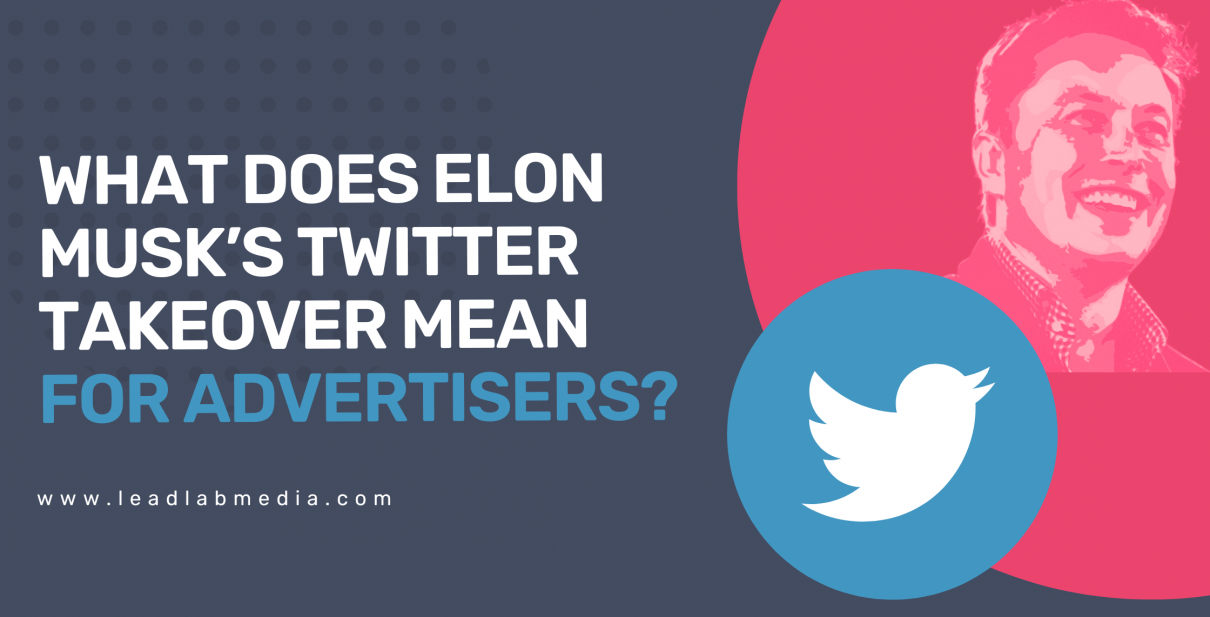 The world’s richest man, Elon Musk, is now the official owner of Twitter. Musk completed the $44 billion purchase on October 27, 2022, and his first move will be to take the company private. Taking the company off of the stock exchange and owning it privately will set the stage for the variety of changes Musk mentioned he will make to the social media platform; from lifting common social media restrictions limiting free speech, to adding a subscription model for verified accounts, here’s what Elon Musk’s Twitter takeover means for advertisers.

The greatest concern for advertisers is the changes Musk has planned concerning free speech on the platform. In Musk’s own words, “The reason I acquired Twitter is because it is important to the future of civilization to have a common digital town square, where a wide range of beliefs can be debated in a healthy manner.” Musk will be reinstating some people that have been banned from Twitter in the past for hate speech or disinformation, and opening up the platform for people from all sides and angles to tweet their opinions.

For advertisers, the concern is that Musk does not have a brand safety plan in place and hasn’t established how brand safety will be kept in line with industry standards.

Musk vaguely reassures advertisers by saying, “Twitter obviously cannot become a free-for-all hellscape, where anything can be said with no consequences.” And he does say he plans to have a “content moderation council” that will review and approve anyone in consideration for reinstatement on the platform. One top executive on his Twitter Council Board stated they felt that “it seemed like Musk was surrounding himself with few voices that would take advertiser concerns seriously.” However, what will actually transpire now that Musk is in charge is unknown. With so much uncertainty around brand safety, we are recommending our clients move their ad budget to other platforms that offer clear brand safety guidelines and are in line with industry standards.

The potential transition to a subscription model could also have an impact on the digital advertising industry. A subscription model would allow users to pay to use the platform and see fewer ads, or potentially no ads. Will advertising be kicked to the curb in this new model? Advertising accounts for a bulk of Twitter’s revenue, at $2.18 billion in the first half of 2022, showing an 11.8% increase from the previous year. With that said, it is unlikely advertising will be eliminated from the platform altogether but there is still a big question mark around how advertising might change with the new revenue model. As the brand safety plan is established and the functionality between advertising and the subscription model becomes clearer, it will be important for anyone running Twitter ads to create a contingency plan.

Once brand safety is addressed and if advertisements are still a staple of the platform, we recommend a test to shift a percentage of funds back to Twitter advertising to gain learnings on how Musk’s Twitter takeover impacts performance. We expect there will be changes to demographic targeting that can pose a challenge for marketers but are not dissimilar to the limitations we faced with the iOS 14 update. For ourselves and all of our clients, we put a big emphasis on the importance of testing, analyzing the results, and determining the best path forward, and we will approach the new Twitter environment in this way before cutting it off completely.

An important mention of the Twitter buyout is that Musk will be merging it with X Holdings, another established company of his, tied to his desire to launch a new app “X” which he hopes will be “the app for everything.” The goal of this app is to mirror the WeChat app that has taken over the Chinese market by becoming an essential tool for day-to-day life; it incorporates messaging, social media, payments, food orders, and more. It is not clear how Twitter plays into the idea of the “X” app but is, nevertheless, something to consider. If Twitter moves in the direction of becoming a “super app”, similar to WeChat, it will offer a new environment for advertisers to test that doesn’t yet exist in the United States.

This is a developing situation that advertising agencies need to stay on top of to ensure clients’ brand safety is top of mind and that media dollars are being used efficiently and effectively. LeadLab Media will continue to monitor the transition of Twitter and provide the latest updates and advertiser recommendations. Follow along on our social media pages to get the newest information and be prepared for any changes that are to come.

How to Get Started With Influencer Marketing

You Can Grow Your Nonprofit with Google Ad Grants