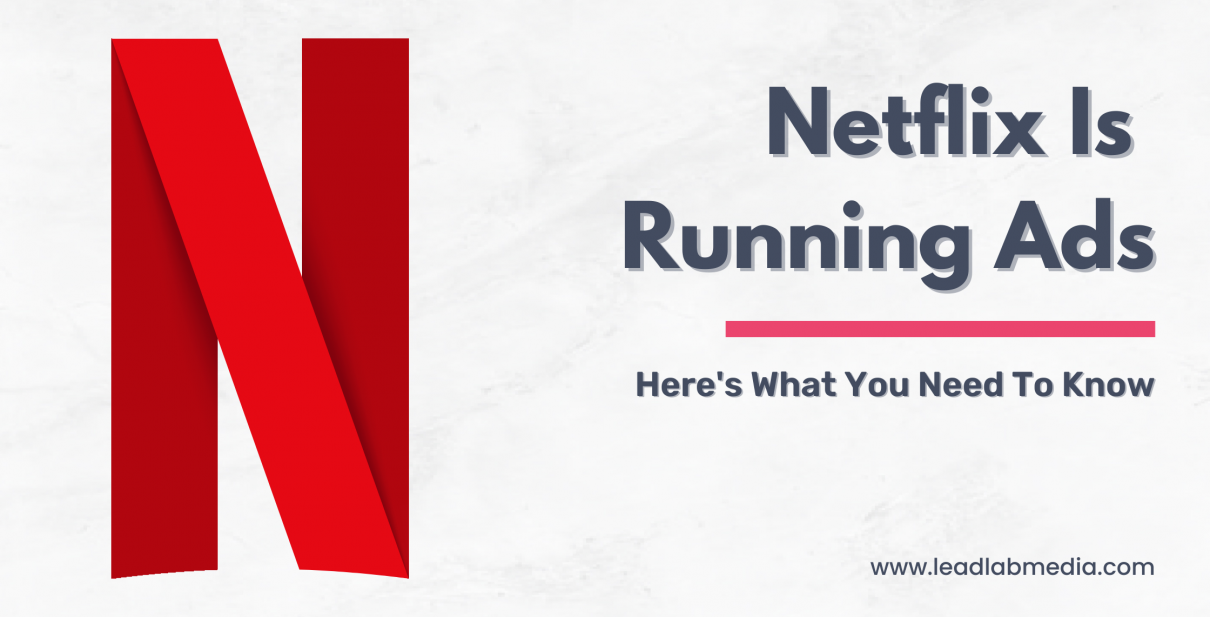 Here's What You Need to Know

Netflix has finally succumbed to the pressure of paid advertising. After years of publicly stating that commercials would never be seen on the platform, the global subscription streaming service confirmed that they would be introducing an ad-supported, lower-priced subscription tier this summer. According to Netflix executives, the timeline for when this new subscription tier hits the market is quicker than originally thought, as they are now aiming for the last three months of 2022.

“Those who have followed Netflix know that I’ve been against the complexity of advertising and a big fan of the simplicity of subscription. But as much as I’m a fan of that, I’m a bigger fan of consumer choice,” said Netflix co-CEO, Reed Hastings. “And allowing consumers who like to have a lower price, and are advertising tolerant, to get what they want makes a lot of sense.”

This change in business model was brought on by the announcement of their first-quarter earnings, which reported a loss of 200,000 subscribers, as well as an expected loss of an additional 2 million subscribers in the second quarter. Netflix’s share price has dropped significantly since the subscriber announcement, losing approximately $70 billion in the company’s market capitalization. With competition in the streaming market, inflation, pandemic disruption, and widespread password sharing, Netflix is facing serious challenges.

Netflix will be partnering with Microsoft to lead its ad tech and sales, so all companies wanting to advertise on Netflix will have to do so through Microsoft’s platforms. Netflix wants to build its ad service on a global scale and Microsoft’s Azure cloud computing service can provide the technology needed for such a large-scale service implementation. Competitors such as Disney+ and HBO Max have in-house capabilities that Netflix doesn’t since both of these platforms already have TV channels and streamers that show ads. Since Netflix is late to the advertising game, the service will likely be making less money selling ads until it builds up its own sales/tech infrastructure and does not have to outsource the technology from Microsoft. Netflix has expressed interest in building out its advertising infrastructure externally.

“Our intention is to roll it out, listen and learn, and iterate quickly to improve the offering,” states Netflix’s letter to shareholders. “Over time, our hope is to create a better-than-linear-TV advertisement model that’s more seamless and relevant for consumers, and more effective for our advertising partners. While it will take some time to grow our member base for the ad tier and the associated ad revenues, over the long run, we think advertising can enable substantial incremental membership (through lower prices) and profit growth (through ad revenues).”

The streaming giant currently offers a variety of payment tiers including, basic, standard, and premium plans. These plans range from $9.99 to $19.99 and remain ad-free. With the introduction of the new ad-supported tier, these current plans are likely to increase in price. The cheaper price of the ad-supported tier is still being determined by Netflix and Microsoft, but it had been rumored to be between $7 to $9.

In 2019, Hulu reported that 70% of their viewers are on their ad-supported plan, and disclosed making $2.1 billion in ad revenue in 2021. With Netflix currently ringing in at 220 million subscribers (quadruple the amount of Hulu subscribers), the streaming giant can expect a significant amount of their upcoming earnings to be from ad revenue. These numbers paired with the chance for lower cost ads while Netflix works out the initial advertising kinks of their subscription plan, means this is a great opportunity for businesses to reach an enormous base of TV streaming audiences.

These numbers paired with the chance for lower cost ads while Netflix works out the initial advertising kinks of their subscription plan, means this is a great opportunity for businesses to reach an enormous base of TV streaming audiences.

Other changes you can expect from Netflix include stricter password-sharing rules. Of its 221.6M subscribers, Netflix accounts are being shared with over 100M non-paying households. Netflix sees this as one of its biggest threats and plans to charge higher monthly prices to those who share their account with multiple people.

“We’re in the early stages of working to monetize the 100m+ households that are currently enjoying, but not directly paying for, Netflix,” the letter to shareholders reads. “Our goal is to find an easy-to-use paid sharing offering that we believe works for our members and our business that we can roll out in 2023.”

Disney+ is also set to launch its own ad-supported version of its platform later in the year, joining Peacock, Hulu, Paramount+, and HBO Max. With the majority of these platforms turning to this business model, one thing is certain, the future of streaming is in advertising.

LeadLab Media values staying up to date on the current news and trends happening in today’s media landscape. If you are looking for a team of experts to keep you in the loop of all things performance marketing and paid media, schedule a free consultation with LeadLab Media today.

How to Get Started With Influencer Marketing

You Can Grow Your Nonprofit with Google Ad Grants